FIFTY-EIGHT-YEAR-OLD FORMER child star Corey Feldman sprinted down the aisle of the auditorium for the debut of his long-awaited documentary, (My) Truth: The Rape of 2 Coreys, on Monday night. Feldman, accompanied by four security officers, asked for the lights to be turned up and took the microphone. Something went wrong.

Feldman heard that the documentary’s website, MyTruthDoc.com, was down when it was scheduled to go live for international streaming at the same time as its Hollywood debut. He was worried about “leaks,” and he didn’t want to proceed with the screening if folks at home weren’t following along live.

He made a cryptic statement to the effect of, “You’re seeing it for yourself how people don’t want this to happen.”

There were cries from the audience about an “attack” on the website, and someone near the front of the stage said that people were “hacking it in real-time,” but it was unclear whether the site had actually been hacked or was just having technical issues. Feldman decided to continue with the showing after a heated conversation with his staff and some advice from a well-known buddy in the crowd.

He apologized for the disruption and said, “Some unpleasant people have tried to turn the tables on me.” But Rosanna Arquette insisted that we shoot on, so let’s go through with the movie. Let’s see this through to the end.

For the past three years, Feldman has been hyping the release of his documentary, (My) Truth, in which he details his efforts to raise awareness of the alleged mistreatment of child actors by the entertainment industry. Feldman said at the premiere that this was also an opportunity to fulfill a promise he had made to his late co-star and best friend, Corey Haim, to “tell his story.”

According to Feldman, this entails disclosing the identities of the individuals who he claims assaulted the two best friends-turned-surrogate brothers as they were coming of age in the spotlight of Hollywood in the late 1980s and early 1990s.

The film opens with an audio recording of Haim’s mother calling 911 after she found her son motionless in their Los Angeles home in 2010 (the release of My Truth coincides with the 10th anniversary of Haim’s death). The Los Angeles County Coroner’s Office ruled the actor, 38, had died of pneumonia, despite initial rumors suggesting he may have overdosed on drugs.

From then, the movie delves into the tumultuous relationship that arose between the “two Coreys” as they were called and their childhood best friend, Haim, after the latter implied that Feldman had known about the abuse Haim had endured but had done nothing to stop it. After Haim’s death, the dialogue was shown on an episode of The Two Coreys, an A&E reality show that ran for two seasons.

Feldman has been promising a documentary about the abuse of child actors by the entertainment industry for the better part of three years, and this week, he delivers with (My) Truth, a film that chronicles the actor’s arduous quest to draw notice to the issue of child actors. Feldman said during the premiere that he wanted to “share his tale” in honor of his late closest friend and former co-star Corey Haim.

According to Feldman, this entails disclosing the identities of the individuals who he claims mistreated the two best friends-turned-surrogate brothers as they came of age in the spotlight of Hollywood in the late 1980s and early 1990s. 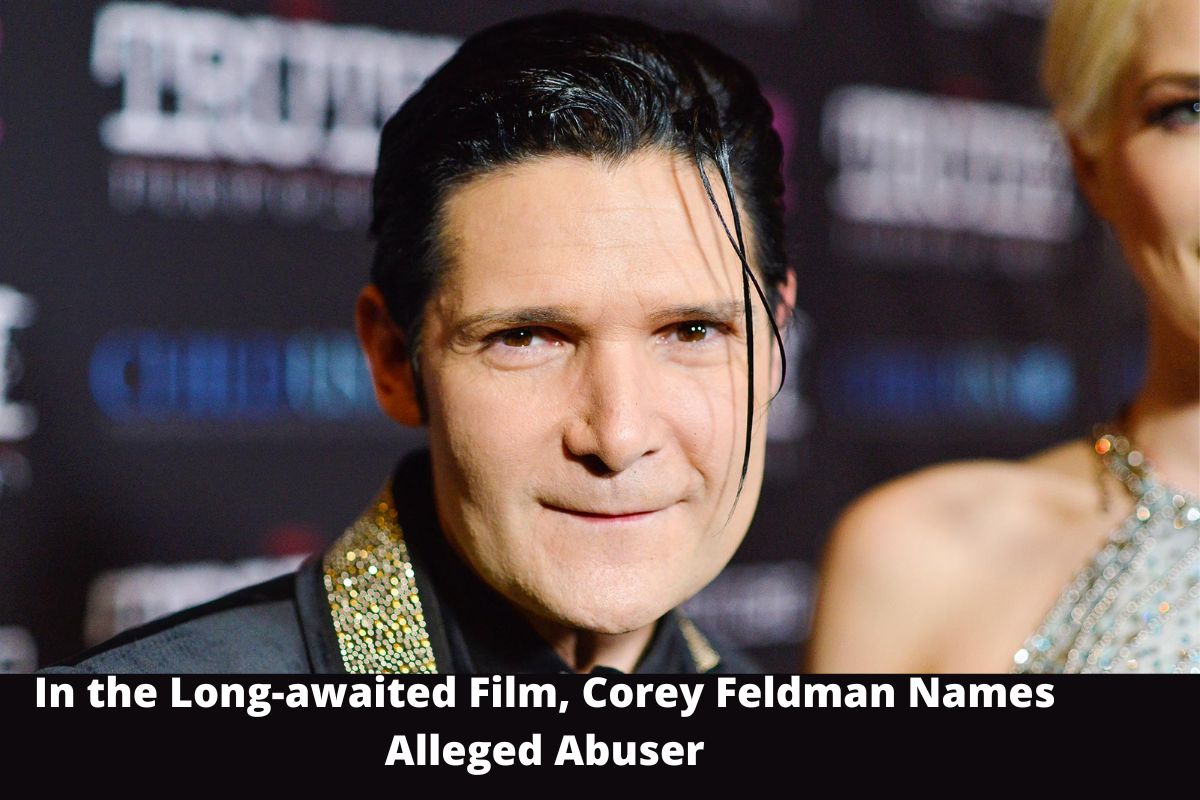 The film opens with an audio recording of Haim’s mother calling 911 after discovering her son motionless in their Los Angeles home in 2010 (Haim passed away in 2010; the release of My Truth marks the 10th anniversary of his death). A few hours later, the Los Angeles County Coroner’s Office ruled that the 38-year-old actor had died of pneumonia, putting to rest rumors that Haim may have overdosed.

The film then moves on to examine the relationship between the “two Coreys,” as they were known, beginning with their time spent together as child actors and ending with the tense atmosphere that arose after Haim implied that Feldman was aware of the abuse he had endured as a child but did nothing to stop it. The Two Coreys was an A&E reality show that ran for two seasons before Haim’s death, and the dialogue in question was taped for an episode.

Feldman has been very vocal about the alleged abuse he and Haim endured while in the industry as children. Feldman refused to name the famous actor who allegedly assaulted Haim, but he did speak out against two “businessmen” who reportedly molested him when he was 14 in an interview with Rolling Stone last year.

In contrast, Feldman speaks up for the first time in the recently released documentary. Feldman accuses Charlie Sheen of raping Haim in a scene that caused gasps in the premiere audience, detailing the alleged assault, which he says took place in two trailers and involved the use of Crisco as lubrication. Feldman alleges the alleged attack took place on the set of Lucas, a coming-of-age picture in which Sheen’s “Cappie” played a protective role for Haim’s protagonist. Released in 1986, the picture also featured Winona Ryder and Courtney Thorne-Smith. At the time of the claimed occurrence, Haim was 13 years old.

It’s not clear if Feldman has been convinced to come out despite the consequences by addressing the potential legal ramifications or if the actor is simply ready to talk. While Sheen refuted the allegations when they were first reported in 2017 by The National Enquirer, Feldman doesn’t bring up Sheen’s name again after the reveal and doesn’t give Sheen an interview or a comment in the film. Sheen went public a few hours after the premiere, saying, “These sick, twisted, and ridiculous charges never occurred. End of story,” the spokesman for Sheen said to The Wrap. I think it’s important for people to hear what his mother Judy Haim has to say, so I recommend reading what she has to say. (A Sheen spokesperson did not immediately return a request for comment from Rolling Stone.)

However, Feldman’s ex-wife Susie Sprague (who featured in The Two Coreys) and Jamison Newlander (who became close to Feldman and Haim after co-starring with them in 1987’s The Lost Boys) back up the charges against Sheen in the documentary. They both state that Haim told them about the alleged rape, implying that it was common knowledge in Hollywood circles but was eventually overlooked.

Feldman named his old manager Marty Weiss and the owner of Alphy’s Soda Pop Club, a sort of Soho House for youngsters in the late 1980s, as two of the three other alleged abusers from his childhood. Feldman further claimed that he was sexually molested by his former aide, John Grissom, during an appearance on The Dr. Oz Show in 2017. Grissom dabbled in acting for a while, making appearances in both Licenses to Drive (1988) and Dream a Little Dream (1989) alongside Feldman and Haim. Dominick Brascia, a character actor who became friends with Haim and Feldman in the 1980s, is also mentioned in the film.

Grissom and Hoffman have both remained silent about the claims and declined to be interviewed for (My) Truth. On the other hand, Weiss has been vigorously defending himself on Twitter, accusing Feldman of flip-flopping and revealing that he, too, was a victim of child sexual abuse.

The film also doesn’t have an interview with Brascia, though it does show a clip from a Dr. Oz interview in which Judy Haim names Brascia as her son’s rapist rather than Sheen. Sheen’s alleged involvement and Feldman’s efforts to expose other abusers are both downplayed in the documentary, with Feldman alleging that she is part of a systematic movement to cover them up. Feldman accuses Judy Haim, the documentary’s subject, of not defending and safeguarding her son in a particularly dramatic sequence. Feldman’s body tenses as he yells, “It’s your fault, Judy Haim, and no one else, so quit throwing the burden on me!”

Judy Haim does not make an appearance in (My) Truth, and it is unclear if she was consulted for this piece. Judy Haim has publicly demanded that Feldman cease speaking these “falsehoods” and has accused him of fabricating the narrative to advance his career for years.

One of the film’s more perplexing features is Feldman’s long-held idea that Judy Haim is out to destroy his name and possibly risk his life. Feldman, along with the documentary’s director Brian Herzlinger (who also participates in it), describes the rivalry between his devoted fanbase (whom he calls his “FeldFam”) and a group of critics he calls the “Wolfpack.” Feldman calls Judy Haim the “queen of the Wolfpack,” and he accuses her of aiding in the efforts to have him silenced through threats and an online disinformation campaign. It’s an idea he’s had previously, but the movie implies that the Wolfpack’s efforts to bully Feldman hurt child sex abuse victims and silence others who may otherwise speak up.

Feldman is portrayed as a whistleblower in (My) Truth, with his action compared to that of those who exposed Jerry Sandusky, Larry Nasser, and even Jeffrey Epstein. Herzlinger frames the film in the context of the #MeToo movement, implying that current events have made it easier to finally bring Feldman’s charges to light, even though Harvey Weinstein’s name is not addressed explicitly. That’s why they’re using the hashtag #Kids2.

Feldman criticizes the studio structure for not creating a safe atmosphere for minors in an interview near the end of the documentary. He claims, “They are responsible for what happened to Haim.” Despite this, he says, “I’m not revealing a bunch of executives. The problem lies with “the little men… like publicists, managers, parents,” and others who work directly with child performers daily, rather than with the executives who oversee the industry. It’s high time they stopped turning a blind eye.

The effects of (My) Truth on Hollywood’s treatment of young actors remain to be seen. Feldman reveals to the camera that he has recently spoken with SAG-AFTRA president Gabrielle Carteris, requesting that she withdraw Sheen’s actor card. Feldman summarises her reaction as saying additional witnesses are needed to prove the case in court. The discussion persuades Feldman to lobby for a change in the law that would allow victims of sexual abuse as children to stay out of court for longer. Much of this legislation is shown to have been advanced thanks in large part to Feldman’s lobbying efforts in a later montage in the film (his home state of California signed a new law last fall that would give victims of childhood sexual abuse until age 40, or five years from the discovery of the abuse, to file civil lawsuits).

On Monday, when he introduced the film, Feldman stated he didn’t want the spotlight to be on him, but on others who don’t have one, like Haim.

‘The most essential topics are the ones you hear about the least,’ he remarked. As the saying goes, “worry when you don’t hear about it.”

Some may ask whether Feldman should recount the narrative of Haim’s alleged rape, considering the strong opposition to the film from Haim’s grieving mother and the fact that we’ve never heard Haim remark on the charges. Though Feldman claims his late friend wanted this to be made public, it is unclear whose words were whose in this situation. But now that he’s finally made good on his promise to speak his mind, the actor appears to be enjoying the freedom that comes with doing so.

Feldman told the glamorous premiere audience, “I didn’t want to do this [film]. However, this is truly a once-in-a-lifetime celebration. For many of us, this has been a long time coming.

Without wasting your time read our article we will give you proper information so.. do follow our site  dailyrealtime.com and get all the latest updates.