The new 2024 Ford Mustang was unveiled on Wednesday evening, and one of the most intriguing features is undoubtedly its Electronic Drift Brake. It’s essentially what it says on the tin: an e-brake optimized for drifting. It’s available as part of the Performance Pack and is available regardless of engine or transmission choice. It is the latest in a growing line of Ford factory-sanctioned hoon assist functions, similar to the new Mustang’s Remote Rev function, which allows you to rev the engine from the key fob, drift mode in the Focus RS, or the Line Lock burnout mode introduced with the previous-generation Mustang.

Unlike a traditional handbrake, the Mustang’s Electronic Drift Brake (henceforth known as the EDB) bounces back down the instant you let go of it. It’s a lot like the hydraulic handbrakes you’d find in a purpose-built drift car driven by flat-brim hat-wearing dudes like Ken Block, Ken Gushi, and Ken Gittin Jr.

Here’s onboard footage of Gittin Jr. drifting his Mustang up Goodwood to give you a visual idea of what I mean. The handbrake is the long metal stick beside his right knee.

In addition to not staying up when engaged, the new Mustang’s EDB is different from a conventional handbrake in that it’s said to be way more instantaneous and, thus, controllable and delivers four to five times more brake force. Ford also says that there are two EDB settings, one calibrated for drifting novices and another for more seasoned powersliders. 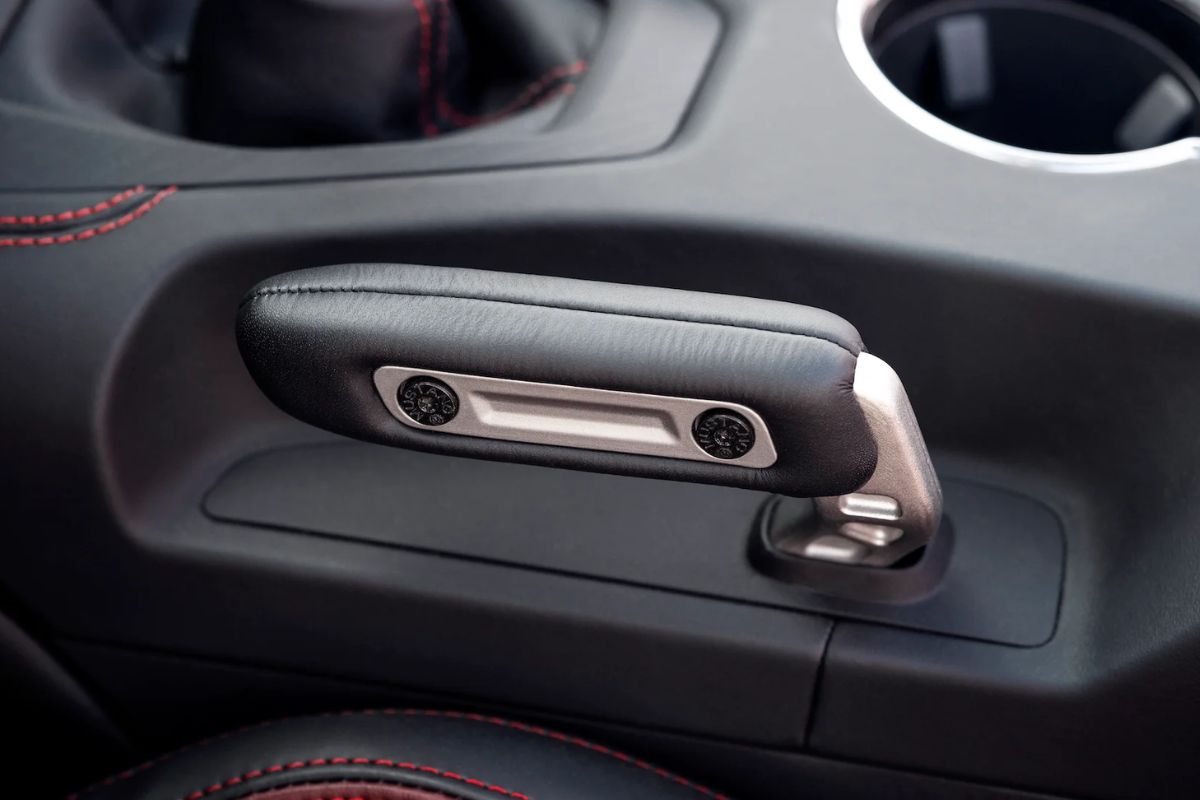 For those who would like to personalize their Drift Brake, Ford says aftermarket EDB handles can be swapped in. As a small easter egg, the little bolts on the side of the factory handle say “Mustang” on them. Because drifting can be dangerous on public roads, the EDB only operates in track mode and must be activated by pressing a button on the touchscreen. Outside of track mode, however, it reverts to a traditional handbrake, but not in the way you’d expect.

Instead of reverting to a regular handbrake that stays up when you pull it, it still bounces back down after pulling on it once, an action that engages the regular parking brake. To release said parking brake, you push down on it when it’s in its default position, essentially rendering the part one big parking brake button.

At a preview event earlier this week, I got to pull on and interact with a stationary Mustang equipped with the EDB, and I can tell you that the input device has a significantly smoother-feeling action than regular manual handbrakes. It’s also got a nice heft that makes it feel like a serious, quality item.

But, of course, we’re excited to try it out in a Mustang that we can actually drive. Preferably in a large open area. With plenty of spare tyres on hand.