After days of record-breaking heat and the eruption of several new wildfires, Californians in the southern part of the state are bracing for the potential impacts of Hurricane Kay, a system that is expected to bring strong winds and more than a year’s worth of rainfall to some areas over 36 hours.

While the hurricane is forecast to make landfall in Mexico’s Baja California before being downgraded to a tropical storm and spinning for days off the California coast, its impacts will be felt across much of Southern California and southwestern Arizona.

UCLA climate scientist Daniel Swain described this week’s weather as “the singularly most unusual and extreme weather week in quite some time in California” in a blog post published on Wednesday.

The storm, which came as parts of Northern California set new daily temperature records for the month of September, posed “a potential risk of serious flash flooding/debris flows on the eastern mountain slopes and SE desert regions/wildfire burn areas,” according to Swain.

In a Thursday briefing, the National Weather Service said that “Confidence remains high for a significant rainfall event across this region.”

Southern California’s mountainous desert regions, which have endured a summer of climate whiplash alternating between extreme drought and rains that have caused severe flash flooding, are expected to receive 3 to 5 inches of rain from the storm over a 36-hour period beginning Friday, with some areas receiving as much as 6 inches. 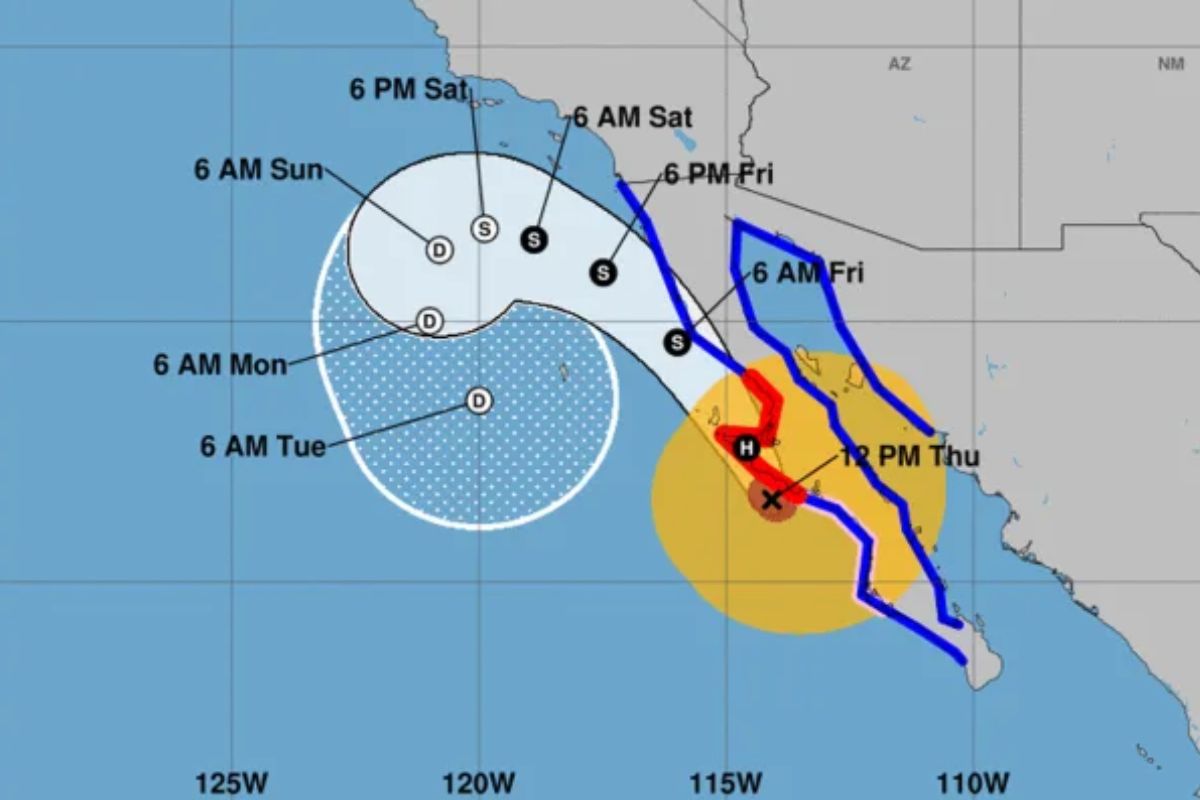 The town of Imperial, which normally receives 2.38 inches of annual rainfall, is one of the communities that is expected to exceed that amount in the coming days. Palm Springs, which averages 4.61 inches of rain each year, is expected to receive between 2 and 4 inches from the storm system.

“It’s never a good thing to get too much rain all at once, a trait all too common among slow-moving tropical storms,” the Weather Prediction Center said Thursday. “Thus, the flash flood potential is summarily also rapidly increasing.”

Kay will bring heavy rain and wind gusts of up to 100 miles per hour to East County, according to the National Weather Service on Thursday. Tropical-storm-force winds gusted to more than 39 miles per hour up to 230 miles from the storm’s center.

Thunderstorms on the storm’s leading edge are also possible, raising fears of more wildfires. Swain wrote that the approaching storm could cause “a brief period of potentially very dangerous fire weather conditions prior to precipitation onset,” but that “as Kay makes its closest approach, fire weather concerns are likely to fade rapidly as precipitation arrives.”

The most likely danger from the storm is flash flooding, and the National Weather Service issued flood watches for parts of Southern California and far-western Arizona for Friday morning through Saturday evening.