In the past, Oliver Stone has directed some excellent films, such as Platoon, which earned him the best director and best picture Oscars. He’s a tinfoil-hatted conspiracy theorist now. The truth is buried deep inside the foundation of his new documentary, JFK Revisited: Through the Looking Glass, which premieres on Showtime on, you guessed it, November 22. It’s been 30 years since the release of JFK, which was the most useful piece of American propaganda ever committed to film. Both are founded on the persistent myth that the Deep State—specifically, the CIA and the military-industrial complex—were responsible for the assassination of John F. Kennedy.

How certain are you that the CIA was in its claim that JFK was assassinated? Millions of Americans are pretty sure that’s the case. So, I must inquire: why do they think that?

The story originated in a Russian propaganda campaign. It was part of the same political arsenal that spread the falsehood that the United States military was responsible for the spread of HIV around the globe. That one that helped Donald Trump win the 2016 election by a landslide. It’s the one spreading false information about the coronavirus and immunizations that poses a serious health risk. All of these initiatives had the same overarching goal: to drive a wedge between the American people, to rub salt in our self-inflicted wounds, and to make you believe that there is no truth. That looney-tunes belief is based on facts. According to Stone, “conspiracy theories are now conspiracy facts” in his book JFK Revisited.

Disinformation needs to have some basis, in reality, to be effective. Furthermore, the assassination of John F. Kennedy represents a gaping hole in the annals of the United States. Better intellect than Stone’s has been swept into the abyss. As a result, many subsequent generations of Americans have learned to doubt the veracity of the government’s version of events. Our town square is now the grassy knoll.

But what you believe about it boils down to this: Either Lee Harvey Oswald, trained by the United States Marines as a sharpshooter before he defected to the Soviet Union, got off a million-to-one shot in Dallas. He acted alone. Or he was an instrument of a conspiracy so immense that it staggers the mind.

As the new documentary opens, Stone paces down Dealey Plaza in Dallas, where President Kennedy was killed, the same place where QAnon crazies gathered recently to await the miraculous resurrection of JFK Jr. and the divine reinauguration of Trump. The director promises his audience that he is about to solve the murder mystery, to “piece together what happened that day and discover the reasons why.” 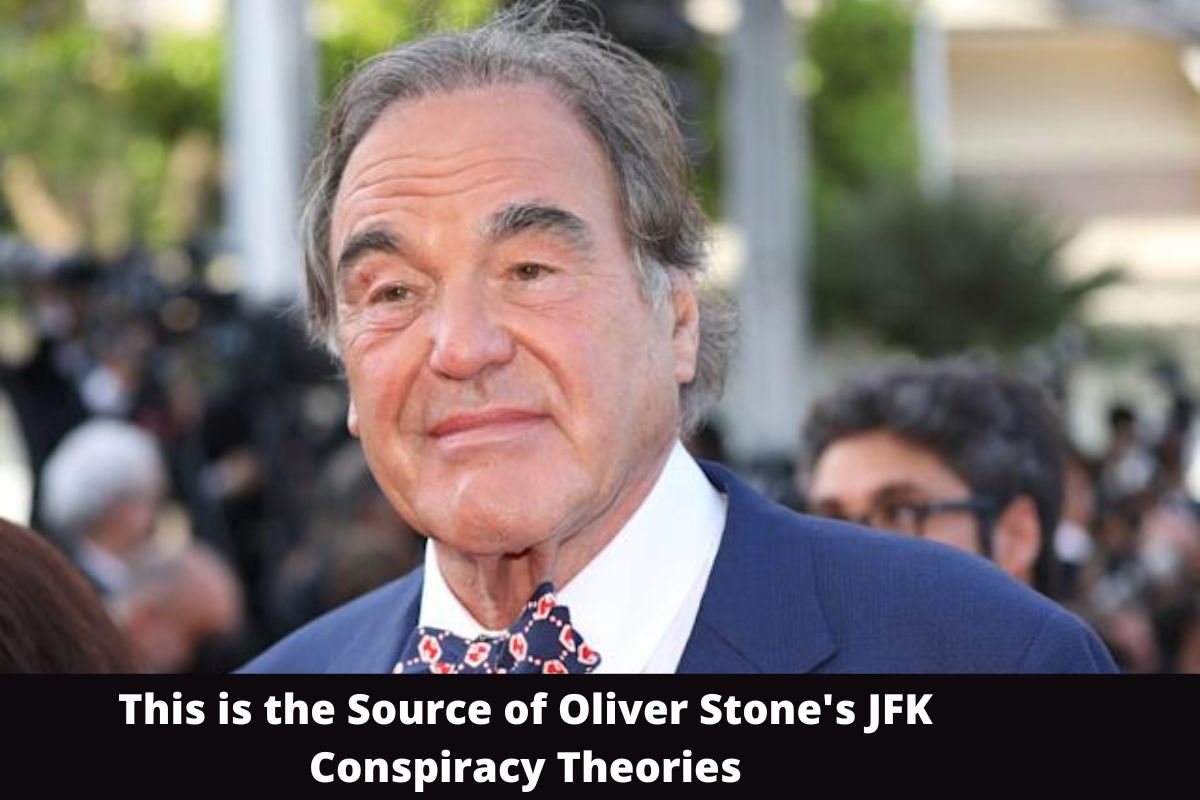 The dark beast of JFK Revisited is Allen Dulles, a founding father of the CIA and its director from February 1953 to November 1961. I know a fair amount about Dulles; my history of the CIA, Legacy of Ashes, lays a multitude of sins at his feet. Dulles often grievously misled Presidents Eisenhower and Kennedy. He oversaw CIA coups in Iran and Guatemala which ushered in dictatorships. His top officers tried to kill Fidel Castro, enlisting the Mafia. He blithely convinced JFK to carry out the disastrous invasion of Cuba at the Bay of Pigs in April 1961, which was his downfall as Director of Central Intelligence.

Stone pegs Dulles as a presiding genius of the plot against the president. To begin building this case, he tells us that Dulles and the CIA backed a failed military coup aimed at assassinating President Charles de Gaulle of France. That’s another lie spun by Moscow.

Like the cold-war CIA, the KGB paid editors and reporters around the world to print stories that could advance the Kremlin’s international agendas. In the late 1950s, it created a directorate to undermine America. Department D — D as in dezinformatsiya — aimed to bend and shape public opinion, and above all to defame the United States. The Department of Disinformation was the world’s first industrial factory of fake news.

A KGB-scripted story about the CIA’s plot to kill De Gaulle first appeared in a daily newspaper, Paese Sera, published in Rome and backed by the Italian Communist Party, a few days after the Bay of Pigs. It was republished in Moscow by the Soviet party organ, Pravda; then in France, and finally across the globe. That was, and is, the M.O. of Russian disinformation operations: start a fire, fan the flames, and blow the smoke around the world.

Six years later, Paese Sera planted the seed that flowered into JFK. And therein lies a tale. (One first told in 2001 by the historian Max Holland in The Wilson Quarterly, a now-defunct political science journal.)

On March 1, 1967, the New Orleans district attorney, Jim Garrison, arrested Clay Shaw, the director of the city’s International Trade Mart and a somewhat-closeted gay man, and charged him with a central role in a conspiracy to assassinate Kennedy. The D.A. told reporters that what happened in Dallas had been “a homosexual thrill-killing.” Three days later, Paese Sera named Shaw as a conduit for CIA funds for espionage and dirty tricks in Rome. The story, crafted by the KGB, ricocheted around the world, landing in New York on the front page of a New Left weekly, the National Guardian, on March 18.

Garrison seized upon it. He fed the falsehood to a friendly newspaper reporter in New Orleans and it landed on page one. He told the world that Shaw was a longtime CIA operative. (He wasn’t, though he had been a casual part-time contact on questions of commerce, one among some 150,000 Americans who volunteered information to the cold-war CIA.) The prosecutor then doubled down. He proclaimed that the CIA had plotted to kill Kennedy and then covered up the conspiracy, that Oswald had been under its control, that the agency was “infinitely more powerful than the Gestapo,” and that it had masterminded a coup d’etat in America in the name of anti-communism.

On Feb. 6, 1969, Garrison put Clay Shaw on trial. His witnesses were a parade of perjurers from the seamier quarters of New Orleans. He presented no evidence tying the CIA to his case. But in his summation, he asked the jurors to strike a righteous blow against the Deep State’s “murder of the truth.” They took 54 minutes to acquit.

Garrison’s tragicomedy had two lasting effects on the United States. The first was immediate: After he announced his charges, the number of Americans who believed that there was a conspiracy to kill Kennedy skyrocketed. A majority still believe it. The second took 20 years.

Garrison spent a decade turning his case into a book called On The Trail Of The Assassins: One Man’s Quest to Solve the Murder of President Kennedy. The co-conspirators in this opus included the CIA, the FBI, the Dallas police department, the Warren Commission, the Secret Service, anti-Castro Cubans, the United States Army, and the Navy pathologists who autopsied JFK. Fifteen publishers rejected it until it was picked up by William Schaap and Ellen Ray at Sheridan Square Press in 1988. (The couple had worked with Phillip Agee, a CIA defector, publishing Covert Action Information Bulletin, a magazine devoted to exposing the Agency’s operations and officers. Agee received a strong assist from Russian intelligence, according to KGB records. No evidence whatsoever links Schaap and Ray, now both deceased, to the Russians.)

On The Trail Of The Assassins would prove to be a hit with the public. Shortly before its publication, as Schaap later recounted, “at a film festival in Havana, we ran into Oliver Stone. And Ellen said to him, ‘Have I got a property for you!’ Because we knew he was an assassination freak, we gave him an advance copy of the book…. Of course, Oliver Stone won’t admit to any of this!”

JFK and its new sequel are, with artistic embellishments, cinematic transcriptions of Jim Garrison’s delusions. The original movie convinced millions more Americans that the version of history wrought by Stone and Garrison was true. National surveys taken after JFK was released showed that three-quarters of those polled believed the CIA had murdered the President. And that, along with the end of the cold war, provoked Congress to begin declassifying millions of records relating to the assassination — a task that remains incomplete nearly three decades later. Both Trump and President Biden have delayed disclosures required under law, though a new set of documents is set to be unwrapped before Christmas.

I’ve spent half my life reporting, writing, and reading about the CIA and American intelligence. I remember the Kennedy assassination; I’ve studied the evidence. And I can’t tell you that there wasn’t a conspiracy. Maybe it was the Russians. Could have been the Cubans. Might have been the Mafia. Maybe there’s a mind-blowing bombshell in the still-classified archives of the government. But I seriously doubt it.

I can tell you for a fact that our democracy is suffocating under an avalanche of disinformation. Trump won the 2020 election! Covid vaccines are seeded with microchips! Democrats are blood-sucking pedophile communists! 9/11 was an inside job! Our body politic is being poisoned by lies. They stalk the land like brain-eating zombies. And we can’t seem to kill them.

We have a moral obligation to call bullshit when we see it. Especially when public figures promote lies for profit. Stone’s JFK films are fantasies. Conspiracy theories are not facts. They’re a kind of collective psychosis. And they’re driving our country down the road to hell.

if you like to read our article do follow this site dailyrealtime.com  we will give you the latest news.