Terrifier introduced audiences to the motiveless mass murdering mime Art the Clown in 2016. Art, perhaps the most terrifying clown in horror history (sorry Pennywise), terrorizes and mutilates partygoers on Halloween night. Six years later, the film’s creator, Damien Leone, has assembled the second installment of what could be an even bigger, gorier, and more terrifying story than previously imagined.

What Is Terrifier 2 About?

It’s been a year since Art the Clown went on his Halloween killing spree in Terrifier 2, and as the holiday approaches, the reanimated murderer stalks his next victims. Sienna and her younger brother Jonathan discuss their Halloween plans with their mother, who becomes concerned when Jonathan mentions dressing up as the murderous clown. The same clown who later appears on their doorstep covered in blood, or creeping up behind Sienna at a local costume store, or on the stage of a children’s performance. Sienna and her friends are planning a stress-free night of partying, but when she receives a call from Jonathan, she realizes that something is wrong. Will Sienna be able to save her younger brother, or will she become a typical, tragic final girl?

Leone was chastised for his first film’s lack of narrative, though some argue that this made the film even more terrifying, citing Gabe from The Office US, who famously stated that in horror films, even narrative is comforting. In any case, the filmmaker set out to write a character-driven screenplay for the sequel. As a result, the teenage main character, Sienna Shaw, was created early in Leone’s career for a project that was later cancelled. Now, the heroine character, dressed in her angel costume, has a starring role in what could be the first of many future Terrifier projects.

When Is Terrifier 2 Coming Out?

After years spent conversing with studios, raising funds, and production being momentarily halted in 2020, Leone and the Terrifier crew have announced an official release date. Just in time for Halloween, Terrifier 2 hits screens on October 6, 2022, after making its world premiere at FrightFest in late August. 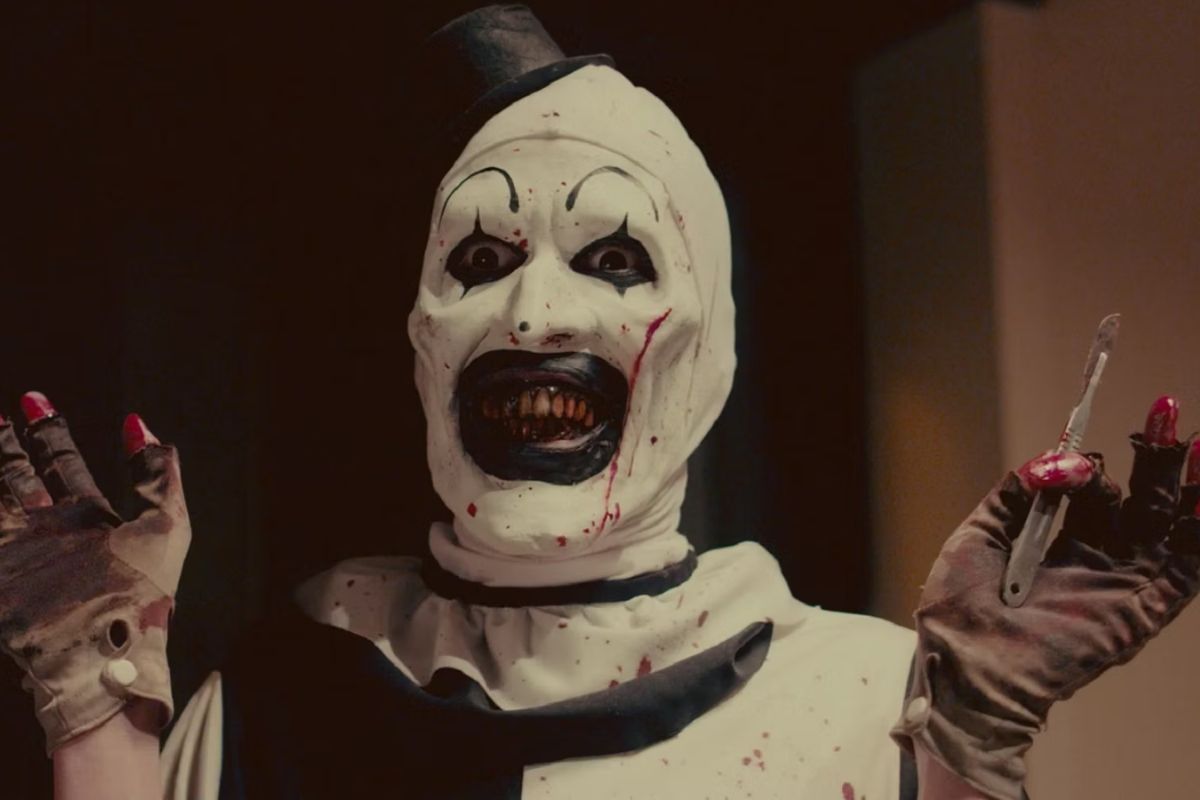 Will Any Cast Members of the First Film Return?

Samantha Scaffidi returns as Victoria Heyes from the first film, who narrowly escapes Art the Clown, though she may be difficult to spot behind her new Gorey prosthetics. Vicky, the final girl in the first film, narrowly avoided being eaten by Art, who ate the flesh off her face as she lay helpless on the ground. Vicky’s new appearance demonstrates the extent of the clown’s damage before his apparent death. In addition, the two police officers who were present will make cameo appearances, as will Michael Leavy, the decapitated exterminator from the first Terrifier, who plays the Club Announcer in the sequel.

Who Is in the Cast of Terrifier 2?

David Howard Thornton will reprise his role as Art the Clown. Known mainly for his lineless role, Thornton is also a voice actor, and appeared as another crazy clown, The Joker (yes, that one) in Nightwing: Escalation.

Protagonist Sienna Shaw will be portrayed by Lauren LaVera who is known for her role of Ciara in the 2017 Netflix Marvel series Iron Fist. Killer-obsessed Jonathan will be portrayed by Elliot Fullman, an up-and-coming actor who began his career in 2018, appearing in the television series Instinct. More recently Fullman has been lending his voice to the children’s series Get Rolling with Otis.

Where Can You Watch Terrifier 2?

Terrifier 2 will have a theatrical release for a limited time before being made available to view exclusively on the Screambox streaming platform. Screambox and Bloody Disgusting media brand’s managing director Brad Miska has previously noted his excitement for the slasher finding its home on the platform and stated that fans are not prepared for what is to come.